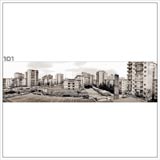 The Inaugural release from One with contributions from lackluster, ronny pries (rtik), randomajestiq, relative q, colophon, plosive, sense, _KhlEr3L, pinkj (paranerd), makunouchi bento, colophon, and whitenoiz. Bringing their unique styles together while keeping the continuity of the mix intact even for its wide range of sound.

but, it was their birthday recently so I decided to add it to my One collection.

in some regards im glad i did this - because in retrospect 101 certainly represented where they wanted to go but now its evident as the year went by and they got more accustomed to the releases they chose their maturity started to shine.

in fact, maybe they even proved their progress by improving beyond this great/popular compilation. intentionally?

Featuring staples such as Lackluster, Sense, Mackunouchi Bento, and many more (including a great commercial techno track by Whitenoiz, programmer of some very unique and powerful VSTs) 101 definitly would have stood out for me as a particularly good release for a .net label if I had gotten it at the time of its release. But now, it's stature is a little lower on the totem pole if only because of where One has gone since this release. There are definitly some classics on this record though such as randomajestic's "Mescalin 13", plosive's first .net label appearance "pavlovian fear" and ronny pries's "bc022".

you can also see the evolution of their residency roster if you compare the latter of 2004's releases with 101. hopefully we'll soon see the same sort of release to compare with in 2006.

Reviewer: ekt - favoritefavoritefavoritefavoritefavorite - February 23, 2004
Subject: Yet another (good) netlabel...
The one01 compilation is an eclectic collection of songs of which you're bound to like at least one. They vary greatly in intensity and feel, from Ronnie Pries' "bc02" - a straight beat pushing shadowy pads along -, the almost orchestral "temposhifterD" from KhER3L, to the playful idm-ish melodies of Makunouchi Bento's "milipong" and "soarele cu dinti",Pinkj's "sylh" and the synth-infused "Pavlovian Fear" from Plosive and Relative Q's "Your Distant Eyes". There is, however coherence, with an intro by Plosive - manipulated samples, and a (possible) end theme by Colophon - classic instrumental rock developing into a drumloop-driven tune. The release is accompanied by artwork by Waka X and Plosive, as diverse as the music, yet united by the same at times melancholy, at times resillient and progressive feel. "Yet another netlabel" (their motto) to keep an eye on.